Chili’s just lifted its permanent ban on Pam Beesly Halpert … and fans of NBC’s “The Office” are eating it up.

In a memorable episode, Pam (played by Jenna Fischer) is banned from the restaurant for causing a disturbance during a company party.  Asking fans whether she should go inside, the actress recently tweeted a selfie in front of a Chili’s, triggering nearly 500,000 combined retweets, likes and comments. 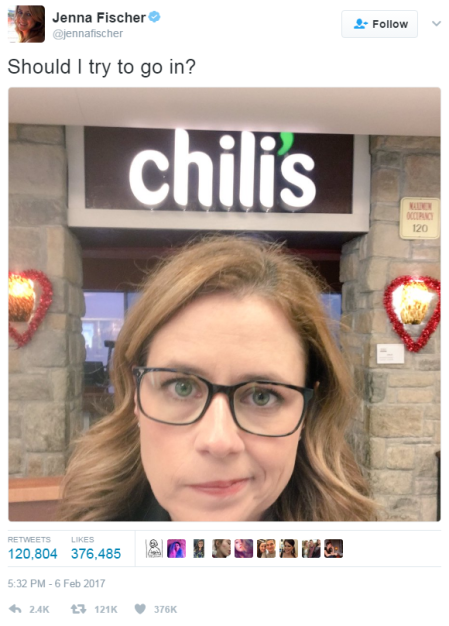 Chili’s was quick to reply and “officially” lift the ban on Fischer’s character. 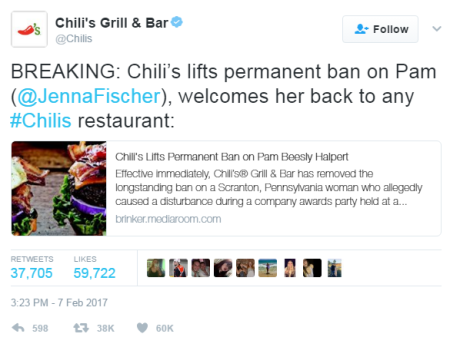 Complete with a quote from the company president, the announcement extended the life of the social media event across two days.  It even prompted some of Fischer’s co-stars to join the fun, enabling the brand to reach thousands of additional followers:

Because of its timely response, Chili’s is now on a growing list of brands that have successfully capitalized on popular culture to boost social media engagement.  These brands understand that the timing of your communication is just as important as the message.

The Chronicle of Higher Education received a different holiday greeting in the newsroom this year – baseball cards.

The Whitehead Institute for Biomedical Research at the Massachusetts Institute of Technology sent reporters information on its researchers in the form of baseball cards, including a photo, stats and signature.  It was well received. 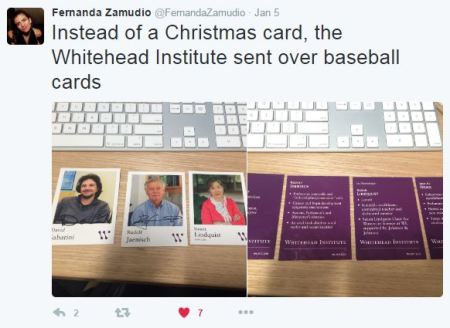 Friday’s eNewsletter roundup to Chronicle subscribers included a quick story about the surprise, demonstrating the effectiveness of the cards. Even though the Whitehead Institute stated the cards weren’t meant to promote experts available to the media, but rather varied personalities and research, I’m sure Chronicle reporters will be reaching for the deck during an upcoming assignment.

When it comes to strategic thinking, the Whitehead Institute knocked this one out of the park.

Inspired by the book, I, Robot, Brian Nave grew up to work and play with robots every day.  He owns Ormond Beach’s LOGICOM Logic Systems and has competed on “Battle Bots” several times.  His team controls Captain Shrederator.

Nave’s story is just one of many in the 23-county region known as the Florida High Tech Corridor.  For more than 15 years, Curley & Pynn has been digging up stories like Nave’s to showcase the people, research, innovation and pioneering work in the central part of the state that has helped support a growing tech hub.  Those stories are curated to produce award-winning content and shared through The Corridor’s annual magazine, which was recently updated with a new digital version online.

The magazine serves as a tool for partners in economic development to further demonstrate what high tech industry looks like in Florida.  Read the cover story to learn more about Nave’s fascination with robots and other stories on interesting things you may not know are happening right under your nose.

Cracker Jack: It’s All About the Prize

When a mysterious benefactor left a basket of Cracker Jack boxes in our break room this morning, I was only too happy to help myself to a box.  I can’t recall the last time I enjoyed the ballpark favorite, but today I would end the Cracker Jack drought.  Tearing into the small cardboard box brought back memories.  It wasn’t necessarily the tasty treat I was longing for – I was in it for the PRIZE.  Aforementioned prize was typically a temporary tattoo, which is probably the only kind of tattoo I would ever dare consider.

Cracker Jack has been around for more than 120 years and I’d speculate that nostalgia has been responsible for its staying power.  There hasn’t been any significant change to Cracker Jack in recent years until owner Frito-Lay announced a few months ago that the infamous “prize in the box” was going bye-bye and would be replaced by a mobile experience.  The box in my hands this morning, however, was clearly labeled to denote that a prize awaited me inside.

Moment of truth.  I opened the box and found the prize – a sticker that would serve as a QR code of sorts so I could play “Blipp the ball game.”  Blippar is an augmented reality app (admittedly, I had never heard of it) and is not owned by Frito-Lay.  The instructions for the mobile experience were difficult to read and clearly not meant for those of us who are farsighted … or nearsighted … or any-sighted.  I managed to download the app and unlocked my prize – a “Step Up to the Plate” game to create my own baseball card.  While I wouldn’t call this experience a “game,” I did get a kick out of picking my name (Captain Cool), play style (hustler, of course) and jersey number (lucky 13).  Below is the result, which I am bravely sharing on this blog.

Cracker Jack, you crack me up.  Will this new prize experience help Frito-Lay sell more Cracker Jack?  That depends on the target.  If it’s children, I’m not sure this mobile experience is enough to move boxes, although it certainly made me laugh.  I still want my tattoo, though. 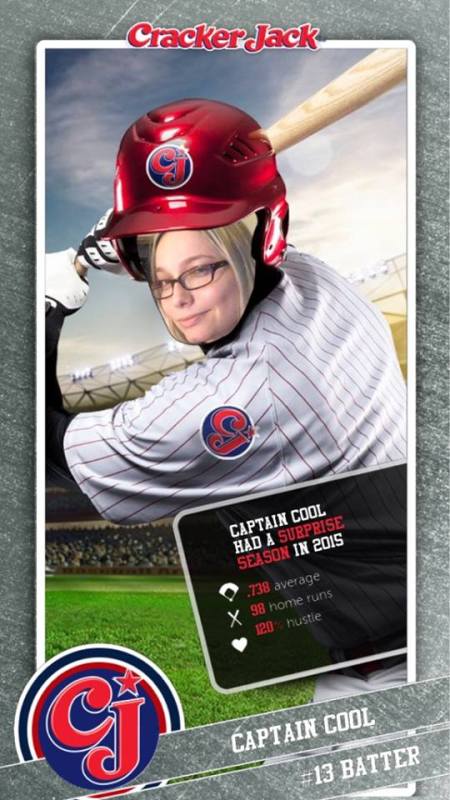 For two years I was the elected board president for Orlando Rowing Club.  Honestly, I had no business taking the “job,” because a few short years prior I had never even heard of the sport.  But, enough people thought I could do it and pretty soon I was running the 100-member club alongside an all-volunteer board.

One of the things that always puzzled me was how many times members came to me with a problem or question and were legitimately surprised when a.) I simply responded to their inquiry, or b.) Found them an answer.  This was a head-scratcher because isn’t that what leaders are supposed to do?

Aha!  Not patting myself on the back here, but finally, some clarity.  I may not have been the best person for the job or the most knowledgeable about rowing, but I was most certainly a mindful leader.

You don’t have to have direct reports to be a leader, either.  As our professor so eloquently pointed out, leadership starts with self.  Whether you want to be a better leader of others or yourself, think about what it means to be attentive, focused, responsive and clear.

One of the most valuable classes in my Mini-MBA program was titled “Unlocking your Leadership Potential.”  It was the final session of the 18-week program, so longtime Rollins professor Dr. Rick Bommelje had a lot to live up to.  And, boy did he deliver.

Instead of being a class about how to lead people—which is what I fully expected—it was a class centered around the art of listening.  Hopefully you can immediately connect the dots on how the two relate.

The second concept that Dr. Bommelje introduced us to is the Golden Pause.  Picture that red Easy Button Staples introduced a few years back, but pretend instead that it’s a giant pause button.  Now, when you’re tackling a tough subject, brainstorming with a group or trying to solve a problem, consider invoking the Golden Pause to re-center your thoughts.  We are so desperate to fill the silence that we don’t take time to really listen to what is being said.  The Golden Pause creates space for contemplation and reflection, and I have no doubt you’ll find it as useful as I have.

(Disclosure: my sister is a Camping World general manager, but I’ve never set foot in one of their stores. Sorry, sis.)

There has been a lot of snark in this town regarding the announcement that Camping World purchased the naming rights for the stadium formerly known as the Citrus Bowl.  The Orlando Sentinel’s David Whitley summed it up with “We are not happy campers.”

Isn’t it a good thing that our recently renovated stadium has shown enough potential for national exposure that a major corporation wants to be associated with it for at least the next eight years?

I understand that some people feel nostalgic for the “Citrus Bowl” name, but times change.  The only place to find an orange in Orlando is the local grocery store.  Orlando is now to citrus what Oklahoma is to citrus.

What I don’t understand are the online comments about the “bad fit” of the name.  Have these people even BEEN to an event at the stadium?  In the parking lots and neighborhoods, all you can see are tables, tents, chairs, grills, generators, coolers, and yes, RVs … all of which can be purchased at Camping World.

Seems to me that the marketers at Camping World have found a great fit, and an opportunity to share their name with large groups of people who quite clearly have an interest in their products.

Those of us in the marketing/PR field dream of such opportunities.

Careful What You Ask For

Social media has given way to a new age of marketing where engagement is far more important than just pushing your message out.   Engagement is surely a great way to interact with your stakeholders, but doing so shouldn’t compromise the integrity of your brand or message.

Twitter has given us numerous examples of engagement-gone-wrong including two campaigns that started innocently enough: JP Morgan’s #AskJPM and SeaWorld’s #AskSeaWorld.

But, don’t be fooled.  Twitter isn’t the only way your attempts at interacting can go awry.  Some organizations are even bold enough to put their taglines or brand names in the hands of users.  What could possibly go wrong?

You could end up like the British Navy whose newest research ship is just votes away from being named RRS Boaty McBoatface.  Thanks to their brilliant “Name our Ship” campaign, the cheeky moniker leads all other user submissions.

I’m not saying you shouldn’t engage with your users, just be careful what you ask for.

Marketers use a number of tactics to increase the open rate on emails they send to customers—and, with good reason.  In 2015 alone, some 205 billion emails were sent per day.  With those numbers, it’s easy to understand why perfecting the subject line is as critical as the content of the email.

Most email platforms even offer tips and tricks to help along the way.  MailChimp gives step-by-step best practices; MyEmma has an interactive “split test showdown” to help users pick winning subject lines; and, companies like Mequoda offer great resources like this list to help perfect your copywriting skills.

With all of those resources, I’m left scratching my head about an email tactic that I’m quite certain is not a mistake.  I’ve opted in for emails from retailer West Elm and, generally speaking, they didn’t seem anymore offensive than any other.  But, then yesterday I received this:

At first, I was thinking, “Ooh, a discount code.”  But, then I remembered that email seemed vaguely familiar.  Sure enough, a quick search of my inbox yielded this:

And, you guessed it … no sign of that “old email.”

We’re all too familiar with the junk that floods our Facebook timelines.  I scroll almost subconsciously past anything that resembles advertising in search of something meaningful from a friend.  And, occasionally, something pops up that breaks through the clutter and stops me in my tracks.

This time that credit goes to the Surfrider Foundation, a grassroots nonprofit organization whose mission it is to protect the world’s oceans, waves and beaches, for an effective ad showcasing how plastic is destroying our waters.

It’s a simple, but clever image and an even simpler message that hit home.  Is your advertising breaking through the clutter?